FOR FURTHER INFORMATION ON THIS EXCITING PROJECT CHECK OUT OUR WEBSITE WWW.RESTORETHESHORE.COM 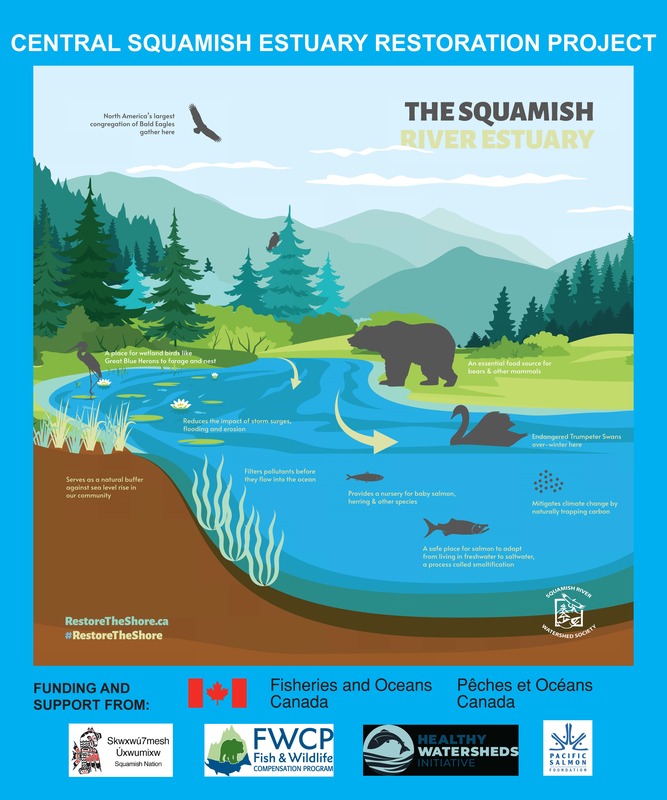 ​The Squamish River Watershed Society (SRWS), in partnership with Squamish Nation and Fisheries and Oceans Canada, was able to secure funding in 2017 for the Central Estuary Restoration (CERP) Project . The Central Estuary Restoration Project builds on the previous restoration efforts to restore fish habitat, tidal connectivity, and overall estuarine function throughout the Squamish Estuary This project was designed to be in three-phases that builds on more than 20 years of restoration work in the Squamish River estuary and is focused on reconnecting and restoring habitat to support the out-migration of pacific salmon, particularly juvenile Chinook (Oncorhynchus tshawytscha)  in their rearing life stage. Juvenile Chinook are considered an at risk species on the South Coast of British Columbia, and are known to be the primary food source for the endangered Southern Resident Killer Whales. The Central Estuary Restoration Project is funded through support from Coastal Restoration Fund, BC Hydro's Fish and Wildlife Compensation Program, and Pacific Salmon Foundation. The project falls under the national Ocean Protection Plan initiative to restore coastal aquatic habitats.

Since 2011 the SRWS has been monitoring the effectiveness of past restoration efforts at restoring fish access and habitat by studying the spatial and temporal distribution of juvenile Chinook in the Howe Sound and Squamish Estuary. Fish monitoring methods include beach seining, minnow trapping, fyke netting, passive integrated transponder (PIT) and acoustic telemetry tagging and DNA analysis on wild and hatchery salmon. Through the monitoring program baseline data on water quality, levels, sediment accretion, fish diet and invertebrate monitoring and photo point monitoring is also ongoing at permanent and non-permanent sample locations established throughout the Estuary.

Results suggest that while past efforts have been successful in many ways, historical impacts including the development of the Squamish River training berm and rail spur line continue to limit habitat function and fish access in the Squamish Estuary. Juvenile Chinook emerging from freshwater environments need to spend some of their early life in brackish estuaries, as they undergo physiological changes necessary for life at sea. The training berm is effectively flushing the salmonids emerging from the Squamish River and its tributaries, including the Mamquam, Elaho, Cheakamus, and Ashlu Rivers out into the Howe Sound, limiting their rearing life stage and likelihood of survival. Studies also suggest that both the berm and the rail spur line also continue to limit the brackish mixing of water in the estuary necessary for habitat function. . Options to improve rearing conditions for juvenile salmonids in the Squamish estuary were defined in consultation with fisheries staff from the provincial and federal governments as well as staff from Squamish Nation as follows:


These options became the focus of the three phases of CERP. Phase 1 was implemented in 2018 and included upgraded an under-performing twin 1.2m diameter culvert with a 3m x 3m concrete box culvert. As well, Phases 2 & 3 are  currently in the planning phase. While restoring access and habitat for pacific salmon is the primary focus of CERP re-connection and restoration of the Squamish River flood plain may offer additional habitat and ecosystem benefits. Some of these benefits will include: improvements to water quality; improvements to flood mitigation and coastal resilience; modifying sediment deposition, marsh accretion, and carbon sequestration to a more natural state, such as existed prior to the construction of the berm;  and capping of persistent pollutants and support known species at risk within the project area. 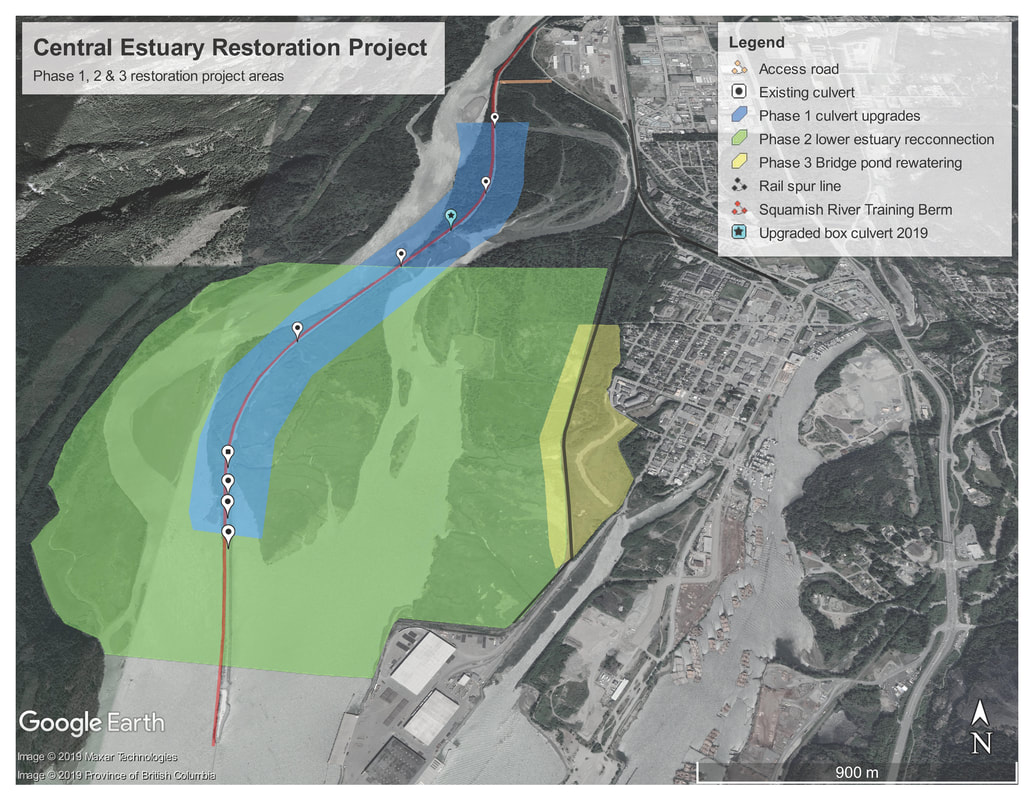